The Consultant That Refused to Swim

”Humouristic with lots and lots of warmth.”

”His best book so far. Humour, seriousness and

warmth all mixed together wonderfully.” 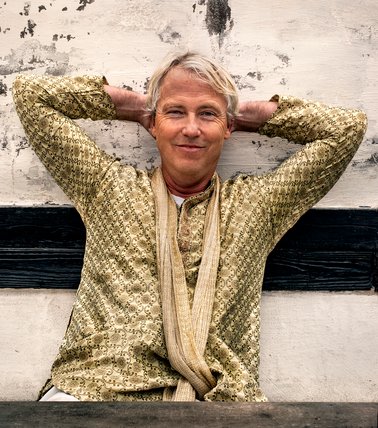 ”I’m really impressed how well written this novel is and it’s funny dialogue and smart language. I laughed out loud several times.”

”A very good book that made me both happy and teary-eyed. Phenomenal, vivid descriptions of surroundings and dialogues that made me giggle.”

”The story about Kenneth gives you a little bit of everything! Believable characters, wonderful environments on the Swedish east coast of Österlen and quick-witted dialogue made this a true page turner.”

“Mikael Bergstrand has a very special way to capture me as a reader. His texts fill a hole in my heart through the vulnerability and emotions within his characters. It’s impossible to put the book down!”

”Written with warmth and humour and I’m both laughing and shedding tears.”

"Human warmth shines a light over Bergstrand's new novel. OCD and hate crime are two of the parts of the story Ingemar's Awakening and we're both entertained and emotional."

”A book on how we humans meet one another, written beautifully with tongue-in-cheek while keeping the serious tone."

"I like Mikael Bergstrands cunning humour. His heartfelt teasing of incapable men and their short comings. He has a delicate touch for chipped individuals that are a bit torn down at the edges and that have a longing to belong or simply enjoy a home cooked meal with the sauce from the fried steak. The tone is similar to those about Göran in "Dehli's Most Beautiful Hands" . But here it is Matz Zern, with two Z, who is waiting for a breakthrough with his acting career and instead ends up working as a caretaker to support himself financially. It's early 80's and the things that mark the time are hilarious and real. I bounce between laughter and being deeply touched."

The Guru in the Pomona Valley

/ ... / third and final book about Yogi and Göran. The starting point is a lively Indian wedding and then the story mainly takes place in the city of Malmö and Österlen [the picturesque southern Swedish landscape]. The relationship between Goran and his live-apart Karin is strained and they take a break. / ... / But then Yogi pops up – bringing joy, long and very complicated sentences and friendship. / ... / This is a happy-go-lucky feel-good novel that works. / ... / there is humanity and a hint of seriousness in the middle of all the cheerfulness."
Smålandsposten

"Entertaining about Swedish eccentricities, the search for your true self and the ability to love yourself as well as others."
Tara Magazine

“This book leaves you with such a great feeling, the language flows, you can feel yourself kind of floating along, it’s alive, a vivid description of both the people and the country. And then that sense of humour! It’s priceless. /…/ This is really very well written, a wonderful feel-good book. You look forward to it.”

“The Indian markers are numerous and well-placed and you can tell that Mikael Bergstrand knows and loves India. /…/ Bergstrand dances off in an, at times, almost Bollywood-like affair in which his irrepressible humour, his imagination and his mastery of the language get at least a reader like myself - one who is, when it comes to waist circumference and emotional life, a brother to Göran Borg - to repeatedly laugh in recognition.”

”The language is hilarious. You are there when you read it.”
Gokväll, Swedish Television

”It is impossible to write a reflection on India better than Shantaram, but Mikael Bergstrand succeeds in bringing the readers  along to filthy backyards, spicy smells and brightly coloured saris.”

”Incredibly funny book. I appoint it the next ‘Centenarian-success’.”
Radio P4, Värmland

"Obviously he knows Delhi well and loves the city and its people. It is a pleasant, entertaining and certainly not stupid story. It's fun for once to see the world through pink-coloured glasses from Malmo."